Next Friday I'll be submitting a book manuscript that has taken *far too long*, and although I have four conference papers to turn into articles by April, and a major paper for May, I am anticipating a little writing time; if only of the 500 Words Before Breakfast variety.

So it is with great pleasure that I have begun printing the notes for chapter 4: Mr. Trease's History of England.
In which Mr. Trease encourages us to consider history from below, and takes young English men and women on a grand tour of Europe. In this chapter I will consider the historical adventure books in strict chronological order of setting, in order to consider the England (and it is England), it’s history and geography, that Trease created, at a time when Englishness was clearly something to be renegotiated, and in which historical fiction for children was part of the conversation. While this chapter will touch on the influence of socialism and the new social history on his work (and vice versa), it will reserve those important issues to a later discussion and chapter in order to make space for a consideration of the more conservative aspects of Trease’s historicals, in particular, the way in which even European History is filtered through the eyes of an English child. Over the course of the chapter a sharp eye will be kept on the changing fashions of history teaching within the English and Welsh curricula and the ways in which Trease created a counter-narrative to much of what was taught in the classroom. Meek cites Dorothy Neal White, but without a ff. ‘Reading a Trease story when one is an adult is mildly confusing because, vaguely remembering one’s own childhood, one is surprised to find that the erstwhile “bad uns” have become the heroes.” (Meek, 1960: 91)

This entry was originally posted at http://treaseproject.dreamwidth.org/5332.html. Please comment there using OpenID.

I have *finally* finished my first draft chapter about novels of the English Civil War/Three Kingdoms. It's about three months later than intended, and about eighteen thousand words too long (26k in total); the latter accounts for the former. And it's a mess, since keeping a grip on super long chapters is damned difficult (thank the goddess for Scrivener). There is also yet to be anything as exciting as secondary reading (Blair Worden) or analysis (me).

If anyone is a glutton for punishment/genuinely interested in what novels about this period are like, let me know and I'll send you the rough, but think of it as one of those basted paper dresses--a semblance of the final product, rather than a kissing cousin.

So what did I find: by the time you do the number count, and look at the nuances, these novels are far less "pro King" than initial impressions give; that far from opting for an elitist "x rides with famous man" approach, they are mostly the lives of ordinaryish people; that ideology matters a lot to anyone on the left of the story and that this means many things; and that nineteenth century writers struggled with issues of class and gender and historical veracity in these issues. Perhaps most important that the one thing many of the authors agree on was that what was at stake was what loyalty and patriotism actually meant. President Obama could do with reading a few of these books before condemning Manning and Snowden; his country's political system is, after all, mostly descended from the men who first questioned whether loyalty to country was the same as loyalty to king.

This entry was originally posted at http://treaseproject.dreamwidth.org/5075.html. Please comment there using OpenID.

Our perceptions of the latter part of the twentieth century however have been distorted by Robert Leeson’s comments in“The Spirit of What Age,?’The interpretation of History from a Radical Standpoint”, in Children’s Literature in Education (1976) he writes that he sampled around two dozen books (check).

I find that fourteen lean towards the Royalist side, some horizontally; five are in the increasingly familiar area of ‘conflict of loyalties’, and the other four we may be said to do justice to the Parliamentary side. (176)

Because Leeson does not give his breakdown I cannot accuse him of an outright distortion but I suspect him of including earlier texts such as Children of the New Forest, which was adapted for television in 1955, 1964, and 1977 and later in a rather distorted version in 1998, but by my figures the post war result is as follows:

(I have not included the 40s but honours are even to Trease and Lane).

One of the “neutral” titles is Ronald Welch’s For the King (1969) which, if not read carefully, for all its ambivalences and disdain of the Royalists, might be classified otherwise, but it is clear that by the 1970s the trend has swung solidly towards Parliament or to neutral, and if we discount Sally Gardiner’s I, Coriander (date?) which is a fantasy and not particularly interested in historical veracity, it has stayed that way.

This entry was originally posted at http://treaseproject.dreamwidth.org/4823.html. Please comment there using OpenID.

This is what the break down of the 107 novels looks like. 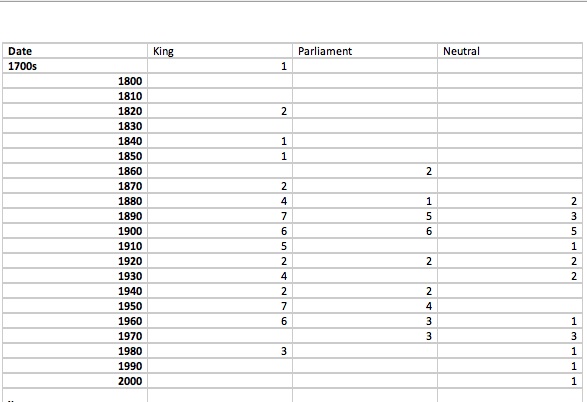 And as I suspicioned: Geoffrey Trease happened to start writing in a period (the 1930s) which seems to have been very pro Royalist (an allegory with Spain perhaps?).

I've finally started writing and if I get the chapter sketched by Monday I'll be asking for Beta readers.

As of today I have notes on 108 civil war novels, ending with the very moving Harrow and Harvest by Barbara Willard.

and a scattering of others. A more nuanced analysis to follow.

This entry was originally posted at http://treaseproject.dreamwidth.org/4442.html. Please comment there using OpenID.

From the author of the Parliamentarian Plain Jane. This is a lovely book.


For the King, and yet produced by the Cromwell Press, It's a beautifully packaged book but I wonder if it's self published? I found myself imaging illustrations that aren't there.

When Nicholas is a teen ager and his sister Katherine barely seven, their father surrenders his house to Parliament. When the Royalists arrive, they shoot him as a traitor. Nicholas leaves to fight for the King, leaving behind a traumatised sister.

Five years later Nicholas, his friend Giles and Giles younger brother Matthew arrive, having escaped from Worcester. Nicholas is contemptous of his sister's timidity but uses her and his cousin Hester as cover for the three of them to escape. Unfortunately Hester's cousin Mistess Barfutt conspure against them, imprisoning Kathrine. Katherine escapes to the Mill where the Miller (a Royalist officer) hides her, but because Nicholas distrusts and despises Katherine her attempts to help them all come to naught/

All is complicated because Giles resembles the description of the king (tall and dark).

Eventually Parliament troops arrive, everyone is arrested, but Katherine. Giles, Nicholas and Matthew escape. Nicholas finds his sister is more couragous than he realised and he and Katherine stay behind to keep the mill working so that if the Miller (who once executed their father) survives, he will have somewhere to come back to).

This entry was originally posted at http://treaseproject.dreamwidth.org/4236.html. Please comment there using OpenID.

This entry was originally posted at http://treaseproject.dreamwidth.org/3981.html. Please comment there using OpenID.

A relatively late contribution from Jane Lane and one that manages to be more skeptical than her other work.

This entry was originally posted at http://treaseproject.dreamwidth.org/3607.html. Please comment there using OpenID.

A very complex family saga which I will return to, pairing it with Both Sides of the Sea (also set in the Commonwealth), and also with Trumpets in the West, which, although a saga of Restoration is contemporaneous, because there are ways in which this novel is profoundly influenced by the war: the theme of factions, of the military gaining ground, of taxes, of curbs on entertainment, and of the rise of one person to immense power, are all major themes.

This is a family saga:
( Collapse )

This entry was originally posted at http://treaseproject.dreamwidth.org/3511.html. Please comment there using OpenID.

Charles, E. R. (1867 (facsimile in 2006)). The Draytons and the Davenants: a story of the Civil Wars. London, Eilbron Classics facsimile of T. Nelson and Sons. Truly excellent novel in two parts of which the second is On Both Sides of the Sea. ( Collapse ) This entry was originally posted at http://treaseproject.dreamwidth.org/3284.html. Please comment there using OpenID.
Collapse